A dedicated team of Ph.D. engineers and students set out to analyze and address the adverse effects of rooms. The protocols and algorithms they developed were considered to be the best in the world.

The Genesis of Room Correction

Before there was digital signal processing, there was analog equalization, and before this, there was the practice of using acoustic treatments. However, before all these things there were the caves and other natural spaces in which our species first began to contemplate acoustics and sound, and soon to follow, the buildings we began to shape around ourselves.

For thousands of years, architects and engineers have addressed acoustics by incorporating design considerations into public spaces; of particular note, Roman amphitheaters dating back to the first century BC. As humanity’s comprehension of acoustics evolved, we built soaring cathedrals and grand concert halls and, eventually, recording studios and sound stages, incorporating unique treatments to minimize the adverse effects of the space on sound. These techniques found their way into private listening rooms in the form of acoustic room treatments and are still commonly used today, although they are expensive and typically not aesthetically acceptable for day-to-day living.

Along came audio engineers with an understanding of the nature of sound and human hearing. These early pioneers could measure the frequency response within a room and design rudimentary analog equalization circuits to compensate for some of the adverse effects. Although innovative for the time, these techniques were limited in scope, challenging to implement, and introduced other issues that affect sound quality.

Enter modern computers and digital audio, which can be leveraged to address room acoustics. In the late 1980s and early 1990s, a joint venture between the world-famous National Research Council (NRC) and the Canadian Audio Research Consortium (CARC) tasked a dedicated team of Ph.D. engineers and students, armed with all known research into psychoacoustics and sound reproduction, to further our understanding of the nature of sound. One objective of this research was to determine ways to analyze and address the adverse effects of rooms. 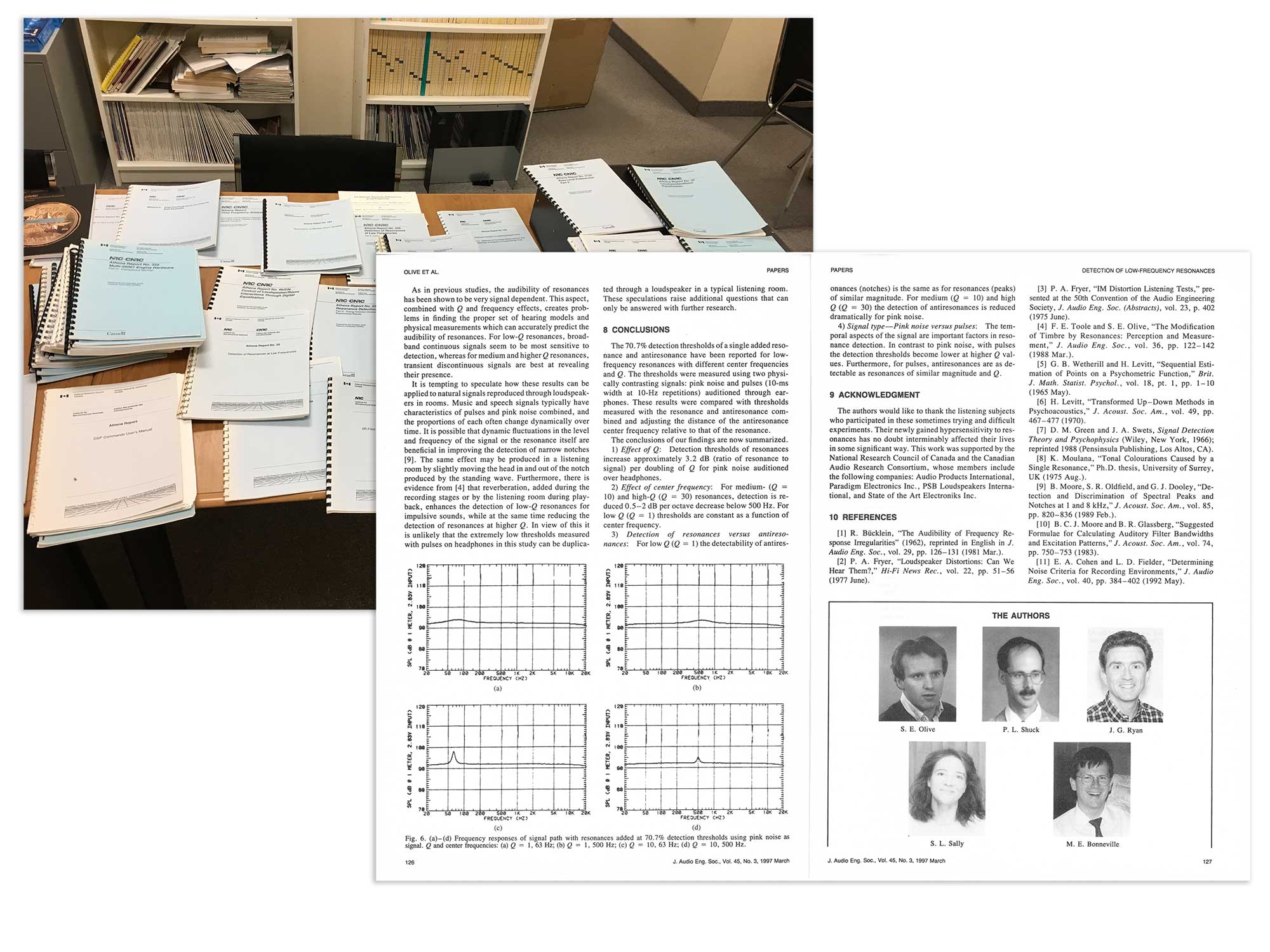 The research initiative, named the Athena project, was partially funded by Paradigm and other Canadian consumer electronics manufacturers. Eventually, the Athena group felt they had covered as much ground as they could and the project disbanded. The data was clear; the protocols and algorithms they developed were considered to be the best in the world. At the end of the project, each company in the Canadian Audio Research Consortium received a CARC processor box and all of the software necessary to make room measurements, interface with the box, and run room correction algorithms. The box included several D/A and A/D channels, four Motorola DSP56000’s, a digital audio XBAR, and several other features necessary to run the room correction software. 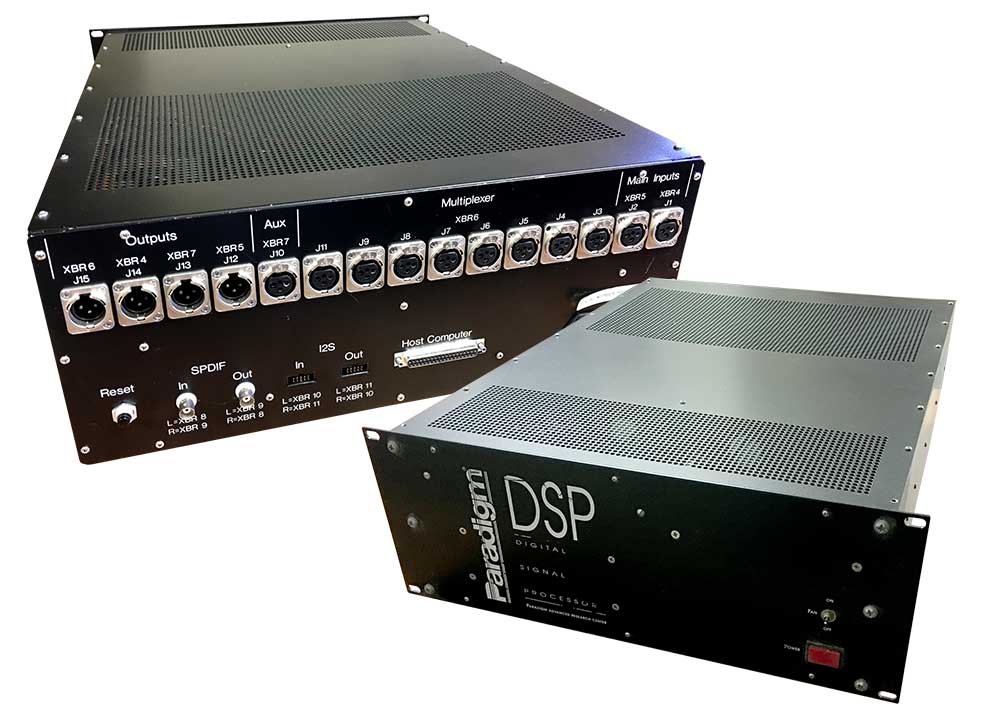 Shortly after the Athena project shut down, Paradigm had an opportunity to hire several top scientists involved in the project, including Peter Schuck, Ph.D., who developed the algorithms and wrote most of the code, and Marc Bonneville, who designed the electronics that made the CARC box work. In 1993 Paradigm opened a dedicated research facility in Ottawa, Ontario for Peter and Marc, known as PARC (Paradigm’s Advanced Research Center). For over twenty-five years PARC has served as a state-of-the-art laboratory dedicated to designing electronics, programming software (including DSP), and innovating other advanced audio technologies.

From Concept to Reality

In 1998 Paradigm acquired Anthem electronics (part of Sonic Frontiers) and with this new brain trust in place, the team of scientists and engineers at PARC started the work of expanding Anthem’s line beyond 2-channel applications by designing innovative high-end electronics for home theater. These products eventually incorporated Anthem Room Correction, the first viable realization of the Athena project’s research into room contributions, into their state-of-the-art home theater processor, the Anthem D2v.

The Athena project remains the gold standard of research on addressing adverse room contributions. While other groups have worked on room correction in the digital domain, much of their work was either based partly on the findings of the Athena project or on early research from which Athena derived some of its conclusions. Anthem Room Correction is the only solution available today that is the direct descendant of the Athena project, and at Anthem, members of the original team continue to conduct research, refine their knowledge, and design practical solutions. 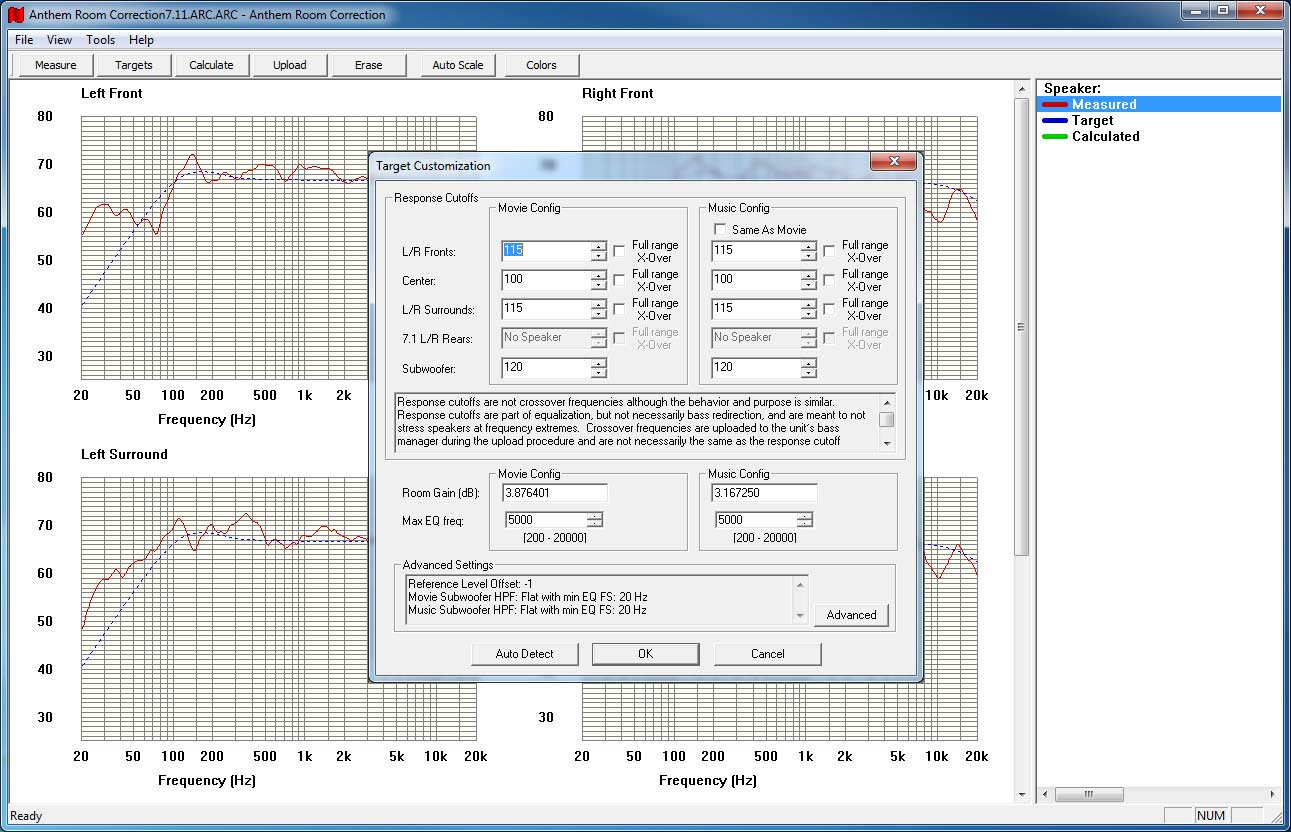 Initially released in March of 2008, Anthem Room Correction (ARC) was only available for use with Anthem’s state-of-the-art flagship Statement D1 and D2 audio/video processors. Shortly afterward support was added for AVM 40 and AVM 50 audio/video processors. In 2010 compatibility expanded to include Anthem’s AVM 50v audio/video processor and first-generation MRX 300/500/700 receivers. With hardware upgrades, several legacy products also benefited from ARC. The user interface offered numerous options for audio professionals to fine-tune many aspects of a sound system’s in-room response. In its original incarnation ARC required an RS-232 connection for data transmission and was only available for Windows PCs.

This original version laid the groundwork for ARCs utilization of a calibrated microphone—an innovation that continues to this day. Anthem engineers realized early on that acoustic measurements and DSP correction cannot be accurate if a mic is introducing deviations to the measured response (which can vary between mics). For this reason, when ARC launched, every mic was individually measured, serialized, and distributed with a calibration file that allowed ARC software to take the deviations into account when calculating the final DSP corrections.

ARC offered another first—the ability to create two room correction profiles. This unique feature allowed users to create multiple scenarios that could then be uploaded to the receiver or processor and changed on-the-fly. Within each profile, all settings could be unique. For example, they could create one using front speakers with no subwoofer (for two-channel listening) and a second which sets the speaker/subwoofer crossover to 80Hz and implements the whole gamut of bass management options (for home theater use).

A later update introduced the Quick Measure feature, which allowed the software to be used as an RTA audio analyzer to view the acoustic response of individual speakers in real-time. This powerful feature makes easy work of fine-tuning speaker and subwoofer placement and adjusting a subwoofer’s built-in control. 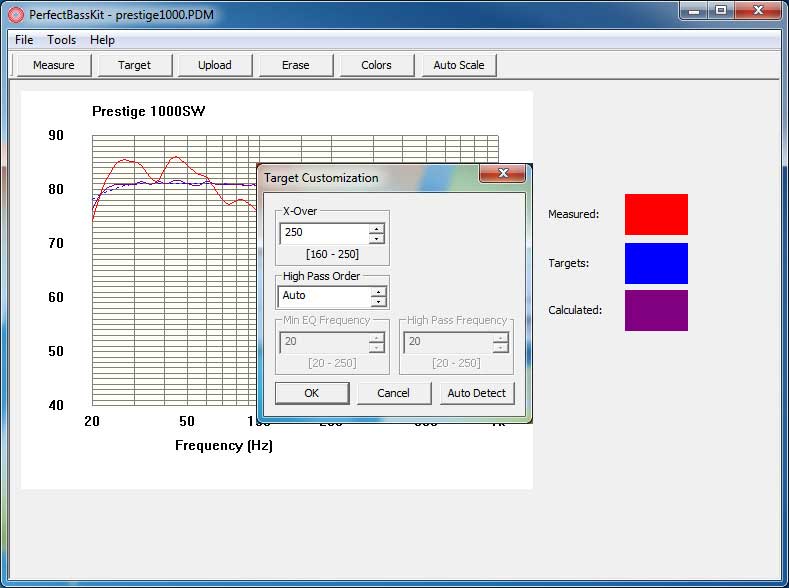 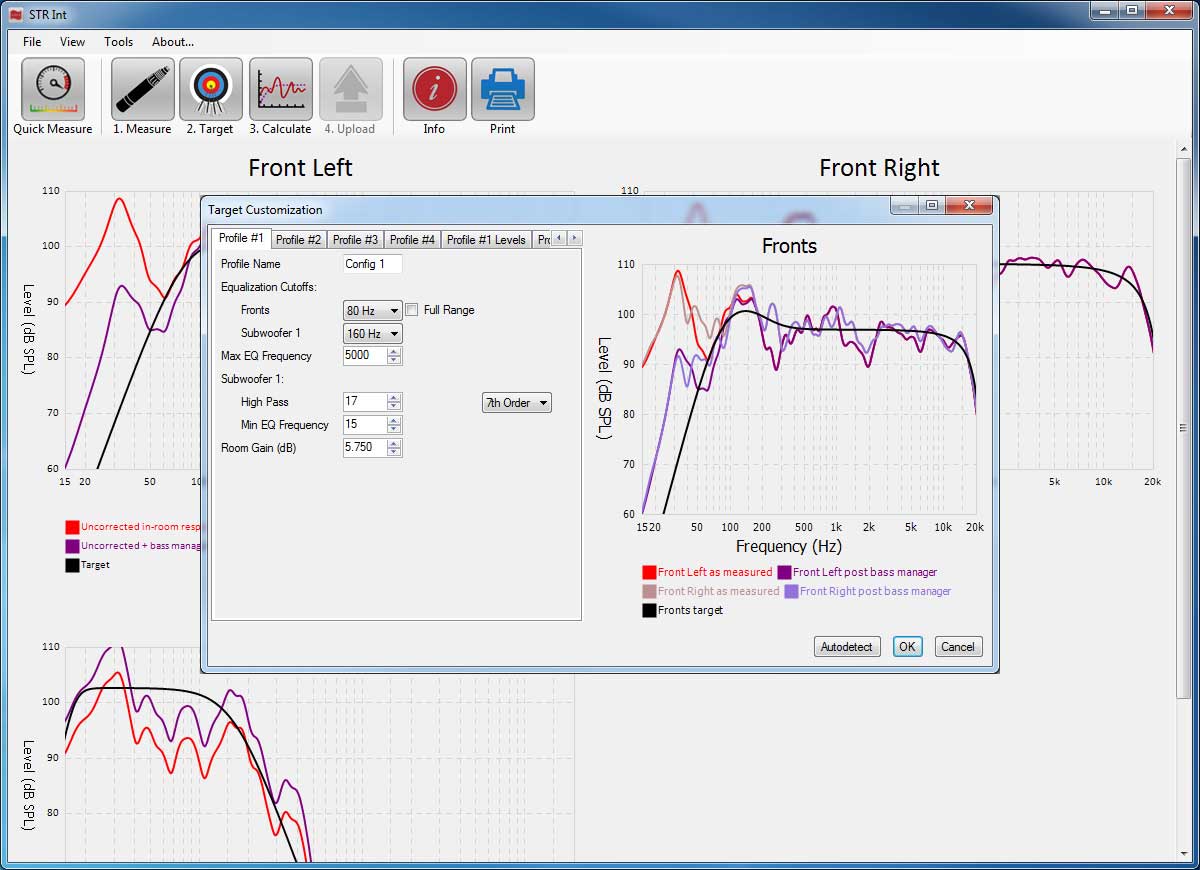 The launch of ARC-2 in 2014 coincided with the release of Anthem’s second generation of MRX 310/510/710 audio-video receivers and AVM home theater processor. This version of the software integrated the capabilities of ARC and PBK into one piece of software and would eventually be updated to offer room correction for dozens of products from Anthem, MartinLogan, and Paradigm. Eschewing the now antiquated RS-232 connection option, ARC-2 offered the ability to connect to compatible audio devices over Ethernet or Wi-Fi connections. A later update allowed the software to connect to select products using a USB connection. ARC-2 implemented a bevy of new features, including an automatic (wizard style) mode to make the process of implementing ARC corrections easier for the novice user.

With the launch of the AVM 60 home theater processor and third-generation MRX 520/720/1120 receivers, the number of configuration profiles expanded to four. Additionally, ARC-2 offered the ability to take multiple sets of measurements. This feature is valuable when the acoustic response within a room is prone to vary predictably. For example, a listening room with a drop-down video screen deployed for movie watching sounds different when listening to 2-channel music with the screen hidden.

ARC-2 was eventually updated to add the Curve Viewer function which allows an in-depth review of measurements and corrections before and after ARC. 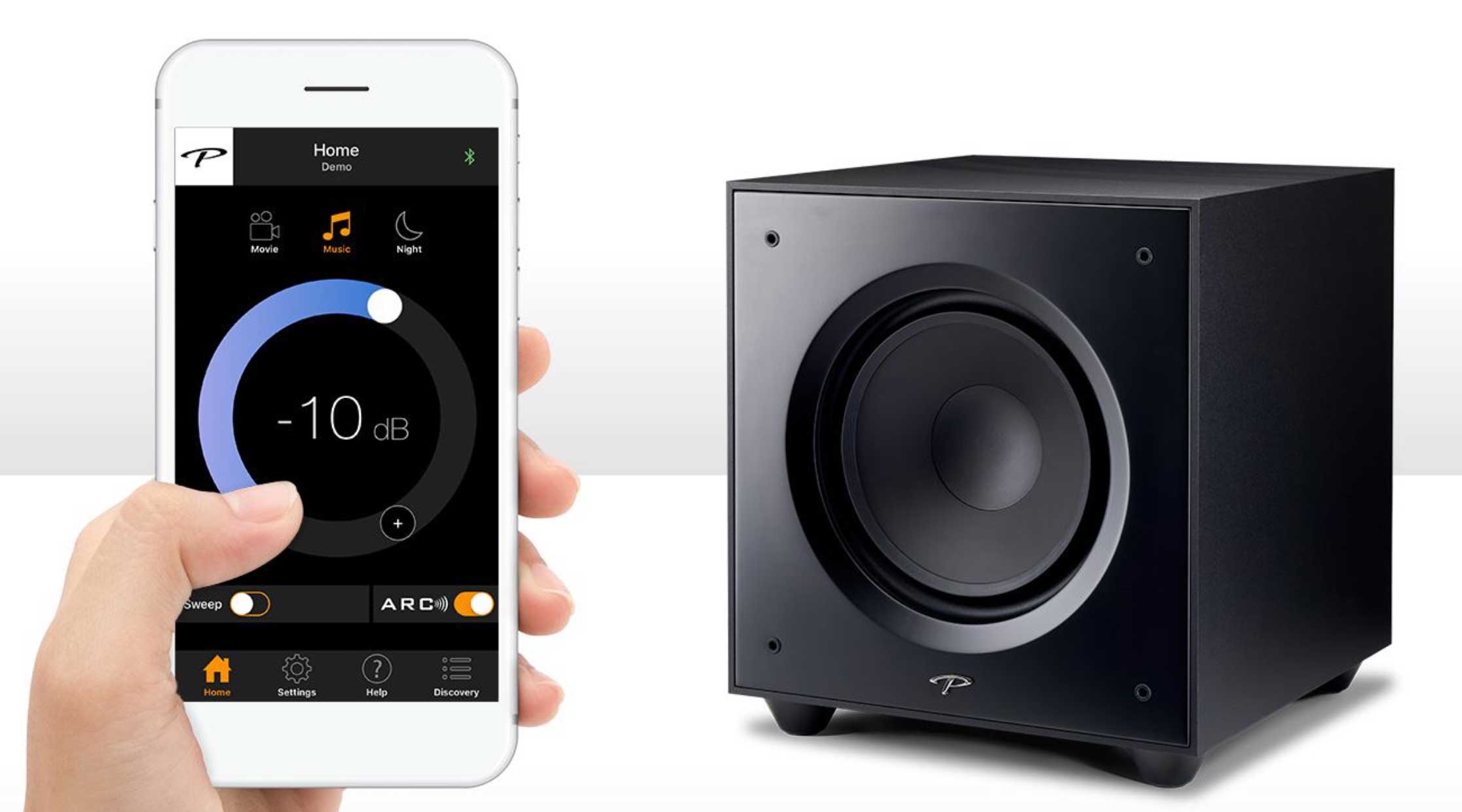 In 2016, ARC Mobile launched. This iOS and Android compatible version offers a fully automated mode that makes the task of implementing ARC corrections more accessible than ever. At first ARC Mobile was compatible only with products capable of connecting to a local area network. A later updated provided the ability to connect to select MartinLogan and Paradigm subwoofers using Bluetooth. ARC Mobile also offers the ability to use a mobile device’s built-in microphone or to attach an external Anthem designed universal mic (for more predictable microphone performance). This new universal microphone features both USB and 3.5mm analog connections and, through careful manufacturing and quality processes, assures tight microphone response tolerances. With these microphones, Anthem, for the first time, forgoes the practice of distributing microphone specific calibration files. 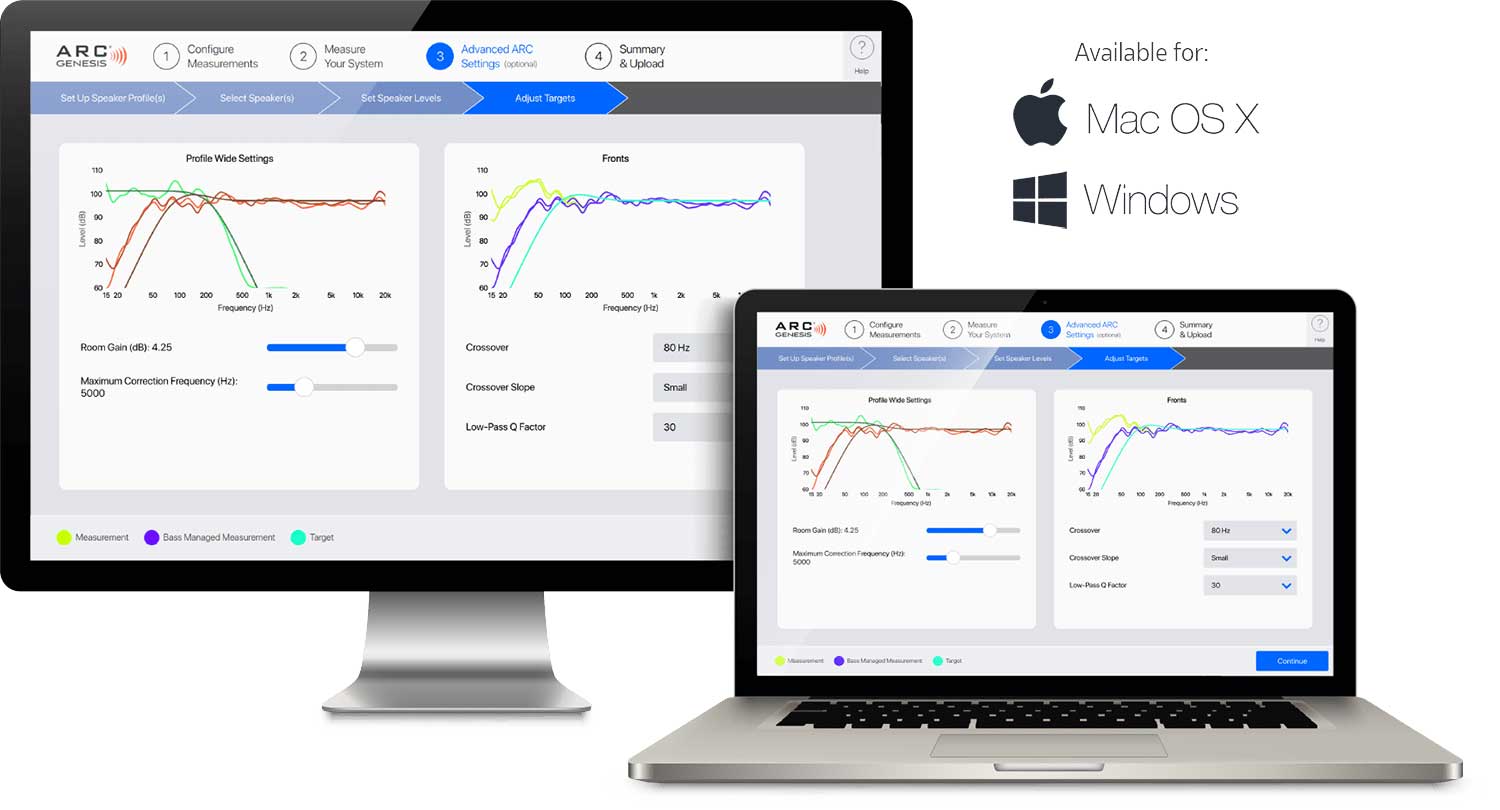 The 2019 launch of ARC Genesis marks a new beginning for room correction. Redesigned from the ground up, ARC Genesis is compatible with all ARC and PBK compatible products (current and legacy) that don’t rely solely on an RS-232 connection for data transmission. These products include older subwoofer models that, until this point, still relied on older builds of Paradigm PBK and MartinLogan PBK software.

ARC Genesis also offers compatibility with every ARC, Paradigm PBK, and MartinLogan PBK microphone manufactured to date. As well, ARC Genesis offers identical versions for both Windows and Macintosh computers. Regardless of your device, personal computer or mobile, ARC now has a solution.